During the third quarter assets declined across the board as stocks, bonds, and commodities were all lower. Equity returns through the first three quarters, as measured by the S&P 500, had their worst performance since 2002. Not to be outdone, fixed income has also had a brutal year – one of the worst years on record. Vanguard provides a history of fixed income returns by splicing together multiple bond indices to create a continuous record of annual returns from 1926 – 2019. By Vanguard’s math, the worst period for fixed income over this span was -8.1%, far better than the -14.8% returned year to date by the Bloomberg US Aggregate index. Unlike earlier in the year, commodities were also weak in the third quarter, as the dollar and interest rates surged, while recession fears grew. 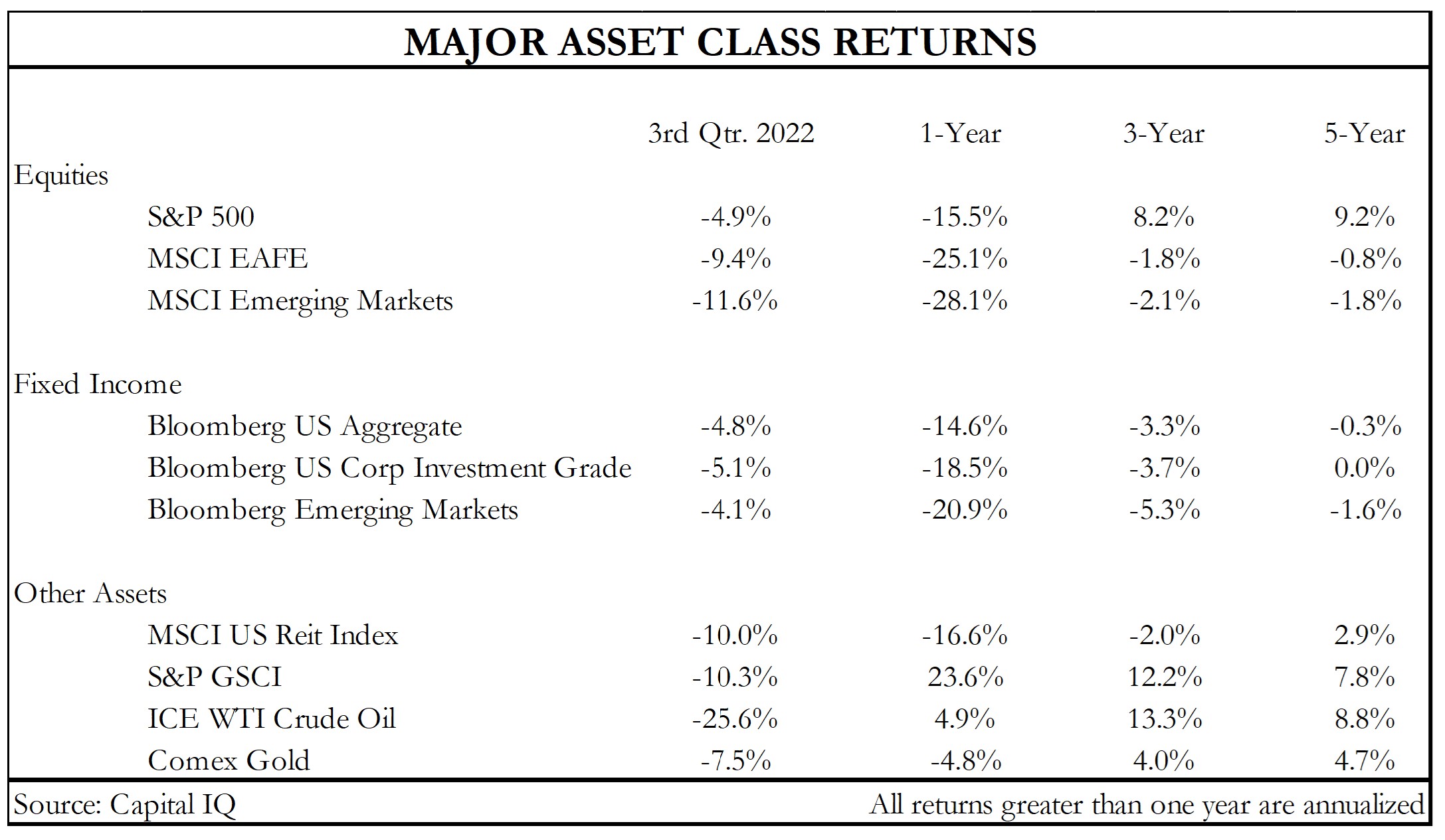 While the market has been extremely volatile, the trends of the global economy have not changed much since last quarter. The most important variable when considering the path of future growth continues to be inflation. On this front, the U.S. unveiled disappointing news via the August consumer price index (CPI). Despite reprieve in earlier reports, the August CPI showed renewed vigor in prices. The Atlanta Fed releases a data series that cuts CPI into flexible and sticky components. The flexible basket, which includes more volatile items, is showing promise. Through August, annualizing the last three months, flexible prices are growing at 3.5%. However, sticky inflation is expanding at 7.1% on the same basis. Big components of the sticky index include housing, medical care, recreation, and food away from home.

The inflation problem is not U.S. centric, but global. Central banks across the world are attempting to cool prices by curbing demand, while inflation in necessities restricts discretionary purchases also helping moderate prices in certain categories.

Regarding the impact from the Fed’s restrictive policy change, the housing market is often the first to feel the impact of tighter policy given the importance of mortgage rates on housing affordability. Housing has clearly slowed with single family permits being down 15% in August from last year, and existing home sales were down 20% over the same period. The slow-down in residential construction is having a material impact on GDP. This sector alone subtracted 1% from GDP growth in Q2 and is expected to negatively impact third quarter growth by 1.3%.

Outside of rate sensitive sectors, the U.S. economy is continuing to grow, albeit at a subpar pace. The Federal Reserve Bank of Atlanta is expecting growth slightly above 2% in Q3 2022; however, when stripping out the volatile trade category, the growth expectation falls to 0.5%.

The third quarter was an eventful one for the Federal Reserve. Over the summer, market expectations of future Federal Reserve policy shifted to one of looser policy. However, Jerome Powell, both at the annual Jackson Hole Symposium and again at the September Federal Open Market Committee meeting poured cold water on the idea of a quick end to tight policy. After the September meeting, the board members released their expectations of future economic figures and the fed funds rate. Year-end 2022 fed funds expectations were raised to 4.4% from the 3.4% expected in June, while 2023 year-end expectations were raised to 4.6% from the 3.8% expected in June. Looking at expectations of economic variables, all were negatively adjusted, with unemployment expected to be higher, inflation higher, and growth lower than prior projections.

We are likely near the end of the current tightening cycle. As of today, the market is pricing in a 0.75% raise at the November meeting, followed by 0.50% raise at the December meeting. Once past December, standard 0.25% rate increases are likely, if there are any at all. Globally, central banks are hiking interest rates due to a mix of fighting inflation and defending their currencies against a strongly appreciating U.S. dollar.

Sentiment continues to be extremely negative. Bank of America’s survey of fund managers reports cash positions at the highest level since 2001, while allocations to global stocks are at an all-time low. Meanwhile, the American Association of Individual Investors’ survey has the bears outnumbering bulls by the widest margin since the week of March 5th, 2009.

Valuations are also much more compelling today than at the start of the year. The S&P 500 is currently trading at 16.1x forward EPS. However, there is a great level of uncertainty surrounding future earnings. If we do indeed enter a recession, EPS estimates will be heading lower. The lowering of future expectations is already playing out, with Q3 EPS estimates declining 6.6% throughout the quarter. During the past 20 years, intra-quarter EPS declines have averaged 3.8%, per FactSet. The upcoming release of company results for the third quarter will provide added certainty to the future path of earnings.

Even though we expected volatile financial markets this year, the length and degree of decline by all primary assets – stocks, bonds, real estate, commodities – exceeded our expectations. The main factor which caused such a dramatic change was, and remains, Fed policy and actions.

We applaud the Fed for their actions taken to offset the shock of the pandemic in 2020 yet, as the economy recovered in 2021, it became clear that easy money and near zero interest rates were no longer necessary and may have been counter-productive (inflation). In early 2021, Fed Chairman Jerome Powell viewed inflation pressures as “transitory” attributing budding inflation pressures to global lockdowns and supply chain disruptions caused by the pandemic. This view changed last November as inflation concerns moved from transitory to fears of a wage-price spiral. The result was a 180 degree turn by the Fed from easy money actions to tight money actions, causing interest rates to jump higher in short order.

The speed in which the Fed pivoted from being loose to restrictive, and the speed of rising interest rates, has caused repercussions around the globe. This includes the strength of the $U.S. dollar, which is being elevated by global investors who seek the higher yields and relative safety of U.S. assets. We also have a close eye on Europe, the UK, and the Credit Suisse mishaps, which may be “canaries in the coal mine” and reminiscent to the Asian Currency Crisis, Long Term Capital Management, and OPEC oil shocks of the past.

The Fed is not the sole factor causing negative returns in each quarter of 2022. Seven months or so ago, Russia began a war with Ukraine that continues to this day. Putin states that the lands and peoples lost by Russia when the USSR broke up still belong to the Mother Country, and his intention to reclaim them continues with no end in sight. The world reaction to this brutal war has been supportive of Ukraine, as the United States and NATO supply modern weapons, support, and training.

From an economic perspective, the war has negatively impacted global GDP, as countries and companies severed trading with Russia, which (pre-war) had the 11th largest economy. As Russia and Europe terminate energy trading relationships, Europe is teetering on the brink of a recession, and we imagine the same in Russia.

Summary and Strategy – We do not believe that we are currently in a recession, though, if inflation remains persistent, then we would expect the Fed to induce a recession in 2023 – 2024. Investors share this concern which, we suspect, may already be incorporated in current stock prices. There is also a decent probability of a ‘soft landing,’ which would be a positive surprise.

While we view stock and bond valuations as reasonable and attractive, we continue to maintain a defensive investment policy at present, as we see markets remaining volatile with global events presenting opportunities for long-term investments. On a short-term basis, investor sentiment and positioning create the potential for a sharp rally that may be sparked by signs of declining inflation, a resolution to the war, the passing of mid-term elections, or combinations thereof. The sustainability of this bounce would then need to be validated by subdued inflation.

In times of high anxiety and stress, we encourage clients to focus on the long-term and maintain an allocation to fixed income and equity securities that is appropriate for each individual client. History has shown that investments in profitable, fundamentally strong companies with capable managements purchased at attractive valuations have a high probability of providing competitive returns and are the best path to creating wealth. While we share the discomfort of the asset repricing process this year, we truly welcome interest rates being “normalized” from a near zero range. We counsel patience as this period is running its course with better markets ahead.

We offer a complimentary “Get Acquainted” meeting to describe our services, and to see if our services are right for you.