Global markets continued their descent during the second quarter. Equities struggled to gain their footing as inflation persisted and the Federal Reserve vowed to do what it takes to bring prices to heel. The macroeconomic influences also negatively impacted bonds, dragging year-to-date returns deeply negative for investment grade issues. 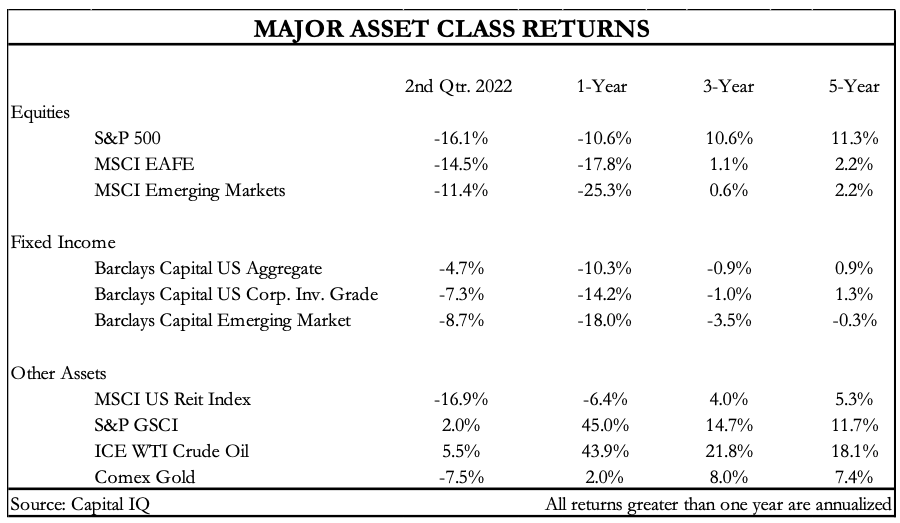 The major variable across global economies is the path of inflation. In the U.S., inflation reached levels not seen in over 40 years. While originally driven by extraordinary demand and limited supply of goods, now, services and shelter are also exhibiting sustained price increases.  Services and shelter prices each grew more than 5.0% year over year in May 2022, whereas overall prices excluding food and energy were up 6.0%. Services – which includes medical care, transportation, recreation, and education – are being pressured from both demand and supply. Services demand is accelerating, as the long-awaited switch back to services from goods has arrived due to lessened COVID complications. Indeed, since October, service expenditures have grown 4.8% while goods expenditures have grown 2.4%. This reshuffle is just beginning – as services are still less than 66% of personal consumption expenditures versus 69% pre-COVID – a difference amounting to $500 billion in annualized spending.  On the supply side, labor is still very much a scarce resource with 1.9 jobs available for every unemployed person. Interesting to note – job openings appear to be losing some steam according to indeed.com though this data is not adjusted for seasonality.

Shelter is another troubling picture with rental vacancies at all-time lows. As noted by a recent article in the Wall Street Journal, bidding wars are breaking out for rental units in cities like New York, Chicago, and Atlanta.  It appears that higher interest rates and rising home values are making a dent in the housing market, which will result in lower prices, or at least lower price growth. Redfin is reporting 6.5% of active listings have dropped their price during the past four weeks, which exceeds any level over the past three years (2019 inclusive).

A Brief Word on Recessions

There are two common ways to determine recession status. Financial journalists and market participants consider two quarters of negative GDP growth as a recession. Given recent data, it is possible the U.S. economy has already experienced two quarters of negative GDP growth in the first and second quarters this year.  Current negative GDP reports have been driven by volatile and smaller components of the economy – inventories, exports, and imports, while trends in larger components, such as personal consumption expenditures have also been softening, but still growing.  We will know whether we meet this definition of a recession when second quarter GDP data is released on July 28th.

The other and official determinant of recessions occurs months after the fact by the National Bureau of Economic Research (NBER). A committee at NBER considers many metrics including – real personal income, employment, consumption, wholesale and retail sales, and industrial production. Recessions need to exhibit persistent declines in economic activity across sectors to meet the committee’s definition.

Whether we are technically in a recession is more semantics than substance. The main points are future economic growth and inflation, and the influence they have on monetary policy and corporate profits. As noted in the Investment Outlook section below, whatever the recession status, a great deal of the slowdown/recession is already imbedded in current prices and risks are now more balanced.

Global central banks have continued to tighten monetary policy to fight global inflation with The Bank of Japan (BOJ) the big holdout.  We expect the BOJ’s position to be temporary, as there is considerable tension building between a weakening Yen, higher inflation, and the BOJ’s 10-year yield cap.  Market expectations of future rate increases have already tightened global financial conditions considerably – a prominent example being U.S. 30-Year mortgages with rates rising from the 3% area to over 5%.  As tighter conditions work their way into slowing the economy, it is possible expected rate increases will decline.

There have been substantial changes to equity market valuations this quarter. The forward price to earnings ratio for the S&P 500 currently stands at 16.4x next twelve-month earnings, which is below the 25-year average, and below the 21.0x seen at the start of the year. JP Morgan data also compares the forward earnings yield (E/P) of the market to corporate bonds, and on this metric, equities again appear quite reasonable, though dependent on the ‘E’ (earnings) being as forecasted. Despite economic data clearly slowing, next twelve months earnings estimates continue to expand, and are up 6.7% year-to-date. If earnings undershoot expectations, stocks may look less attractive.

Investor sentiment continues to be pessimistic, as the prevailing view can be summarized as “nothing can or will improve for the foreseeable future.”  This view is held by both retail and institutional investors. While poor sentiment and undemanding valuations are good starting places for prospective equity returns, we remain concerned about earnings expectations. A more tempered outlook for future earnings would provide fertile ground for launching the next bull market.

Two- and one-half years from its origin, the COVID pandemic serves as the cause, directly and indirectly, of major problems around the globe. With business commerce locked-down the supply side of the economy was impaired while massive government stimulus fueled demand for goods and services. The natural result from these imbalances was upward price pressures (inflation) reaching levels unseen in four decades. This forced the Fed to pivot 180 degrees from providing liquidity to removing stimulus and raising interest rates. The swiftness of this policy change was unexpected, causing stocks and bonds to sharply decline. Putin’s invasion of Ukraine disrupted grain and energy markets, adding to supply disruption and inflation pressures. Yet during the same period, there were positive changes that are not being recognized and warrant consideration such as the following.

Though COVID may be here to stay, lower case and death counts are increasingly changing the perception of COVID to that more like a seasonal flu. With a large percent (nearly 80%) of the population being vaccinated, attendance at activities show more people engaged as life moves on.

Negative bond yields first surfaced in 2014, then the pandemic caused an explosion of negative bonds ($18 trillion in 2020). In the same year, an oil surplus overwhelmed storage capacity causing oil to trade at negative levels. Both markets have normalized as negative bonds are now below $2 trillion and energy prices have spiked higher with supply shortages.

While the supply-side is not yet considered normal, inventories are starting to grow, delivery times and backlogs have improved, and most importantly, over the last seven months, the labor supply has been surging. Overall, the supply-side is trending back toward normalcy.

Excessive financial stimulus created an environment that spawned uneconomical speculations that threaten financial market stability. The financial markets in 2022, though painful, have restored the investment environment to health. Bonds have reverted to a normal valuation relative to inflation expectations, and the stock market has been drastically revalued. As a result, the excessive-leadership concentration among a handful of mega-cap companies has been corrected, speculative investments have found their true or zero value, and the valuation of the overall stock market is below the average since 1990 for the first time in the post-pandemic era.

With interest rates soaring, recession risk rising, stock prices collapsing, and with the Fed turning hawkish, it is difficult to see beneath the turbulence. Yet, normalcy is gradually being restored. Though bond and stock prices may further decline, the risk/reward relationship imbedded in stock valuations at current prices is the most attractive we have seen since the pandemic surfaced (March 2020), and we are now able to earn meaningful returns on bond investments (3%+). In sum, a high-quality diversified portfolio is expected to provide competitive total returns in the years ahead. While no one knows when the actual bottom has been reached, a strategy of investing excess liquid funds into longer dated assets (bonds and stocks) is recommended.

The Importance of Staying Invested

As the second quarter ended, investors couldn’t avoid seeing headlines announcing the worst six-month stock market performance since 1970, fueled by the Fed’s mission of decreasing inflation by raising interest rates.  As stocks have teetered on the bear market line, which is defined as a decline in prices of 20% from recent highs, it’s important to avoid making rash decisions in one’s financial portfolio. Panic selling in a down market could have long-lasting effects on one’s wealth.

Whether we are in a recession already or entering one is up for debate, but many economists and Americans are pessimistic about the path for our economy.  When an economy is weakening, wages become stagnant, consumer and business spending slows, and unemployment can rise.  Stocks, driven by a company’s future profit expectation, turn lower.  For an investor, the biggest driver of their actions is emotion.  Fear can cloud rational judgement and drive investors to sell, locking in what was once just a paper loss. Recessions and bear markets are part of investing; however, they do not last.  According to the Schwab Center for Financial Research, the average bull market lasts for about 6 years with an average annual cumulative return of 200%, while the average bear market lasted roughly 15 months delivering annual cumulative losses of 38.4%.  Recoveries from bear markets are also front-loaded.  The table from Schwab below shows the return of 4 different portfolios during the recovery of an average bear market.

Although all 4 portfolios participated in the recovery, the one who stayed fully invested through the market bottom had the greatest return, fueled by the first month of recovery.

Diversification can help cushion against losses, as there are segments of the market that get hit harder than others in a bear market.  The tech sector, for example, is getting hit particularly hard this year after a great bull run. Diversification means having a mixture of stocks in different sectors, as well as bonds or fixed income investments of different issuers and maturities, including government Treasuries, that can provide income for short-term expenses or reinvestment into attractively valued stocks or higher yielding bonds.

As always, if you have any questions, or need assistance in any manner, please know we are available at your convenience.

We offer a complimentary “Get Acquainted” meeting to describe our services, and to see if our services are right for you.